Boating In Seaside, Cannon Beach, Gearhart and Astoria, Oregon: The Gateway to the Pacific

In addition to the ocean, Oregon's North Coast area has multiple lakes, rivers, and streams that provide a wide range of boating opportunities for everything from small boats to sailboats and yachts. 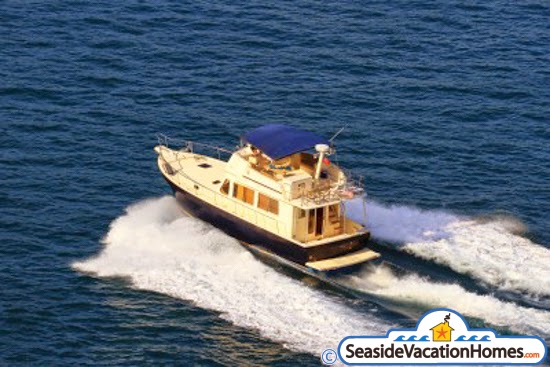 The rivers will be flowing and fish will be returning in great numbers for boaters. Because the water calls to people when the temperature rises, here are some things to consider before heading out.

Cruising: Water level projections are great and so is the wildlife viewing! Hot days bring everyone to the water. Be courteous and patient. Boat ramps may be crowded with people who don't know how to launch a boat properly. Give them a hand. Also, be a good boater. Stow your trash and remind people to pick up after themselves. It's everyone's responsibility.

Weather: As always, be aware of the weather and watch river conditions carefully. Wind direction can change suddenly and morning fog can limit visibility. Hypothermia: Waters in the area are cold (40-50 degrees) through July and sometimes don't warm above 60 degrees in many water bodies. This means hypothermia can set in within 10-20 minutes for an average person. Cold water immersion is more of a threat when the air temperature is warm and the water is frigid. Dress appropriately and wear layers. Wearing a life jacket gives you the time you need to safely re-board your boat if you accidentally fall overboard. Also, ensure that you have a means of getting quickly back aboard without assistance by using a ladder or even a dock line.

Before Heading Out: Double-check your boat, motor, equipment and safety gear. Check for reported navigation hazards. Be sure to have a float plan that you share with a family member or trusted friend that includes information about where you plan to go and when you expect to return, so they can notify authorities if you are overdue. Do you have your Boater Education Card? All boaters operating vessels over 10 hp need to carry their card.

Here are a few of the most popular boating spots near Seaside, Oregon: 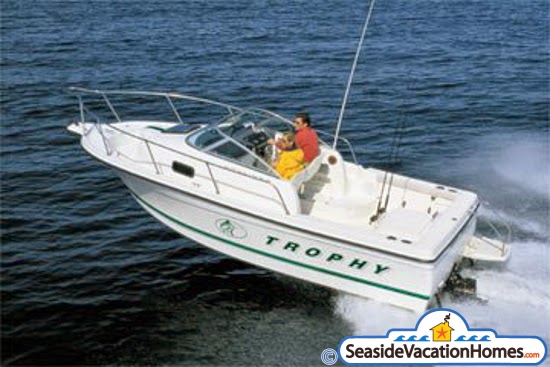 Boating & fishing on the Columbia River is an experience like no other. The Columbia River is the largest river in the Pacific Northwest. It originates in British Columbia, then flows south into the state of Washington and then west to form much of the border between Oregon and Washington. Spanning over 1243 miles in length, the river drains parts of seven states and a Canadian province for a total area of 258,000 square miles. The Columbia is the fourth-largest river in the U.S. and has the greatest flow of any North American river draining into the Pacific.

The Columbia River has the largest runs of King Salmon and Summer Steel Head in the lower 48 states, and the best Sturgeon Fishing in the world. The Astoria area has several coastal tributaries flowing into the Columbia that provide excellent fishing opportunities, including Youngs River and Lewis & Clark River. 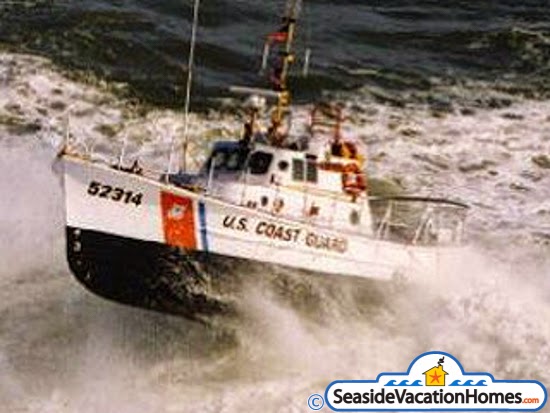 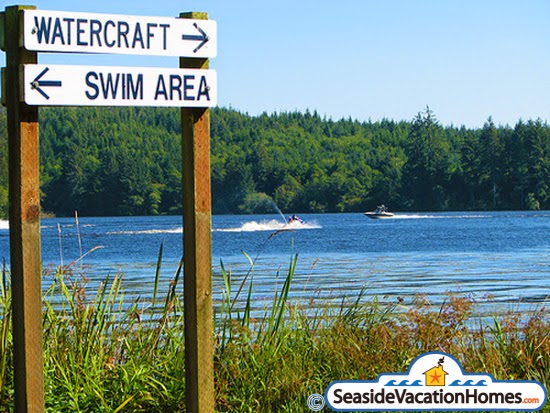 Cullaby Lake is the largest of the many lakes on the Clatsop Plains of the north Oregon coast. It is named for Cullaby, a well-known Indian character of the region, reputed to be a grandson of one of the members of the Lewis and Clark Expedition that wintered nearby in 1804-05.

The two-mile long lake is fed by several small streams; the largest is Cullaby Creek, draining an extensive swampy area at the south end. Outflow is north through a ditch into Skipanon Creek, entering the Columbia River about six miles to the north. Water level in the lake now fluctuates from a low of about 7.5 feet above mean sea level in the fall to about 9.5 feet in the early spring.

The surrounding landscape is mostly covered by a spruce-hemlock forest. Private timber companies own most of the land on forested slopes to the east. The main focus of recreational activity at Cullaby Lake is the warm-water fishery. Pan fishing is excellent from spring through late fall; crappies, bluegill, perch, catfish, and large-mouth bass are all taken. Fishing for catfish is said to be particularly good at the south end of the lake. Cutthroat and rainbow trout are also found in the lake, but generally not fished with much success. Clatsop County maintains a large park, Cullaby Lake Park, on the northwest shore; it includes a boat ramp and dock, restrooms, playground, picnic tables and a sandy beach. There are no overnight facilities at the lake. 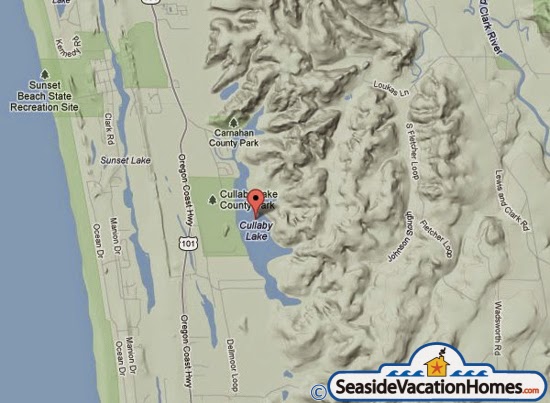 Fort Stevens was the primary military defense installation in the three-fort Harbor Defense System at the mouth of the Columbia River (Forts Canby and Columbia in Washington were the other two). The fort served for 84 years, beginning with the Civil War and closing at the end of World War II. Today, Fort Stevens has grown into a 4,200 acre park offering exploration of history, nature, and recreational opportunities. 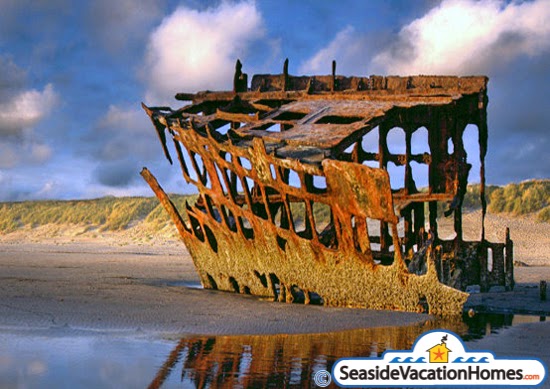 Coffenbury Lake has two swimming areas, a picnic area, restrooms, and a boat ramp (10 mph boating speed limit). Two other smaller lakes offer boat ramps for fishing and canoeing. Throughout the year, you can browse through displays dating back to the Civil War at the museum, visit the only enclosed Civil War earthworks site on the west coast, and explore the gun batteries. During the summer, tour a rare 90-year old underground gun battery that served as a World War II command center, and take a truck tour of the fortifications spanning the Spanish-American War and World War II (tour available at a nominal charge). 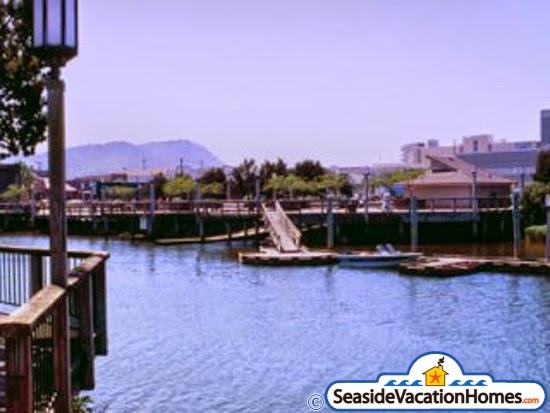 The elevation of the river's source is approximately 1,580 feet (480 m). It flows generally west, along U.S. Route 26. Approximately 3 miles (4.8 km) from the coast, east of Tillamook Head, it turns north. The river enters the Pacific Ocean at Seaside. Its final approach to the ocean is nearly parallel to the coast, bisecting the city of Seaside south to north.  Neacoxie Creek, flowing in from the north and draining Clatsop Plains, is the last tributary before the river enters the ocean. 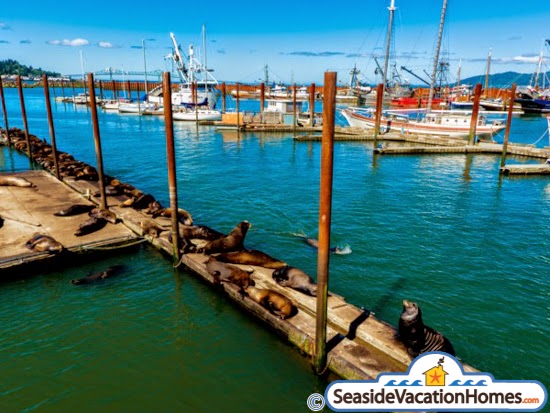