Planning an off-season trip to the coast? If the weather is soggy and the kids are bored, the North Coast offers two fully digital Dolby-equipped movie theaters that show new releases for all ages and interests. If you prefer to kick back without the kids and watch a movie on a couch with pizza and beer, we also have a non-traditional theater where you can do just that.

For real movie buffs, learn about movies filmed in Oregon at the Oregon Film Museum in Astoria, which is housed in the old jailhouse that was featured in Goonies.

The Seaside Cinema is located just north of the Seaside Factory Outlets on Hwy. 101 & 14th. The cinema is a great place to take the entire family,and with six separate theaters under one roof, you may have the theater all to yourself! See blockbusters as they release, enjoy cartoons with the kids, and don’t forget to pick up some snacks at the snack bar. It is wheelchair accessible and they provide listening devices for the hearing impaired. Birthday packages and theater rentals are available. 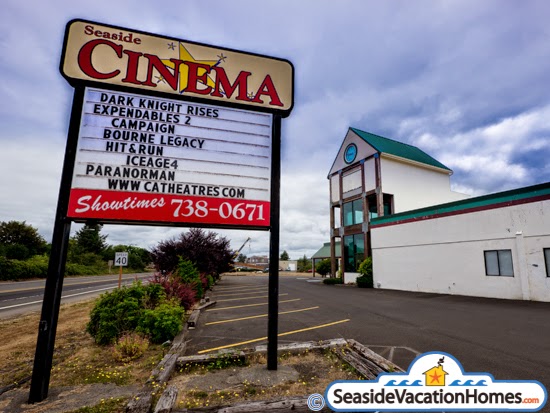 1875 Marine Drive in Astoria
(503) 338-6575
A short drive north on Highway 101 will take you to the Astoria Gate Cinema, a busier theater that features stadium seating. They are also equipped for 3D, and offer birthday packages, theater rentals, and if all that isn't enough, they give free refills on a large popcorn! It is wheelchair accessible and listening devices are available.

1102 Marine Drive, Astoria, Oregon 97103
The Columbian Theater in Astoria is one-of-a-kind! Although kids are always welcome on the main floor, the balcony features comfortable "living room" style seating where you can enjoy beer and pizza with the movie. The price of admission is "family friendly" as well!