Rock Climbing is inherently dangerous and should be performed by only trained individuals aware of the risks. That said, there is some climbing on the North Coast and we highly recommend you pack a pair of shoes and a crash pad if visiting the area. Rock in the area varies from basalt columns to hardened sediment metamorphic. Climbing is all about balance, -- knowing your body and being able to reposition it in space. It's about creativity -- learning to adapt to what the rock has to offer. It's a whole-body exercise and though your upper body gets a fair share of grunt work, your legs and feet are your most important instrument for upward motion. It's about concentration and overcoming your fears for the void. Many people start later on in their life, and there are excellent climbers of all ages. It's all about discovering the natural world around and within you. Climbing will bring you to lots of lovely places and will definitely give you a unique perspective on the world below you. You'll learn a couple of things about yourself and the people you climb with.

Climbing is both an individualistic and social sport: when you're on the rock you can only count on your skills to get to the top. If you do fall however, you'll have to trust your climbing partner with your life. Beyond question. No mistakes allowed. This often makes for very strong bonds and relationships.

Learning to climb is very much like learning to ride a bike or ski down a snowy slope. You'll never forget the basic moves, but will need years of practice to perfect them. 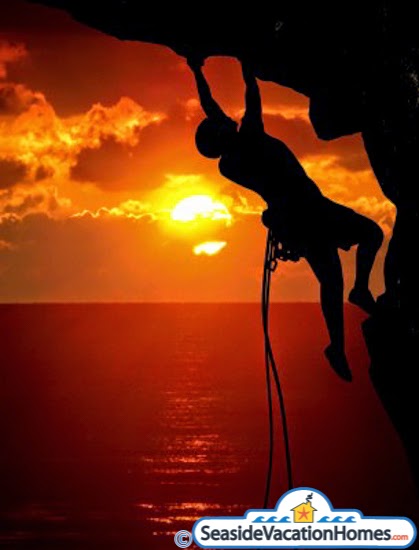 Bouldering addicts climb short jumbles of rock, often only a couple of feet high. The key here is linking the moves: because of their short height bouldering problems tend to be fairly intense and technical. It's hundreds of feet of difficulty compressed into 5-10 moves. Unless you're climbing so-called highball problems you'll climb unroped and close enough to the ground to be safe to jump off from. During the nineties there was a renewal of interest for this game. Thousands of bouldering areas have cropped up worldwide. 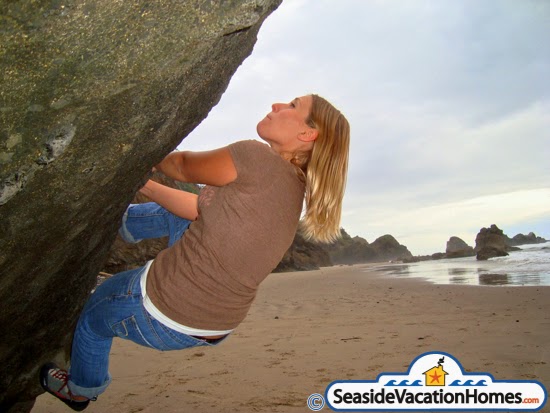 Rock in the area varies from basalt columns to hardened sediment metamorphic. Most is loose. Most is covered in grime, however, some fun problems do exist. The redemptive feature of this area is the breathtaking scenery which makes exploration in itself worth your time. 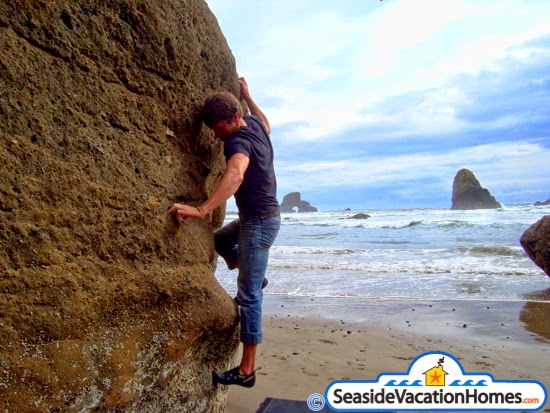 Where To Go
Indian Beach / Secret Cove: Located in Ecola State Park, there are some great boulders for bouldering in a little cove just south of the main beach.
To reach this cove, scramble over the hilly bluff on the south and head a little east to re-enter the next cove. There will be a somewhat overgrown trail that will lead down to the sand. You can rock hop directly off the bluff but we strongly suggest against this. 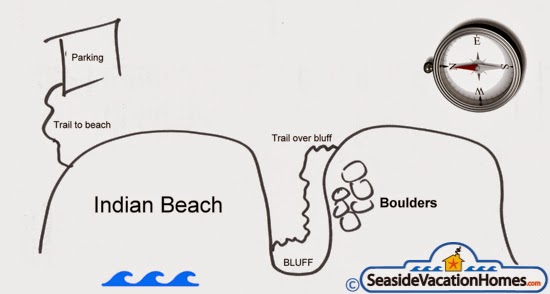 Gear: Once you find the rocks you will have read this and brought with you: a towel, fairly large scrub brush and crash pad. The salt, sand, and wind leaves a crust on much of the rock that can be fairly easily cleaned, but without cleaning expect having to brush with your hand or foot before each placement. Chalk and shoes – well, do what feels best.
Safety:  This area is primarily hardened sediment. I am sure there is a more scientific name but essentially it looks like mud with rocks in it. This mud rock tends to break loose so it helps to test holds whenever possible before climbing and during the climb before fully weighting any hold. Check out Dr. Kevin Fawcett Get a FA @ Indian Beach's Secret Cove:
Neah-kah-nie Cliffs: Located on Hwy. 101 as you enter Manzanita from the north, these basalt cliffs have been mentioned in a number of sources for climbing on the North Coast but the reality is that the climbing is sketchy and isolated. Manzanita is known for high winds which are concentrated on these walls, so if you get in bad spot or get hurt you can expect not to be heard and have a 50/50 chance of cell service. The rock can be solid in spots but is mostly loose and tends to break off in huge death chunks. That said, some great panoramic climbing exists if you can stomach the risk. The person who told us about this area stopped climbing there after two seasons because they said everything moves and it was just a matter of time until something fell on them or their partner. 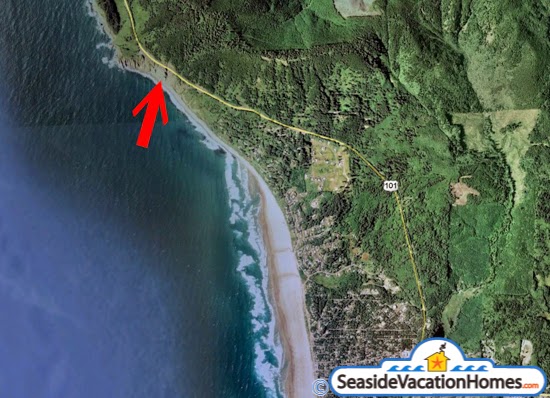 The walls act as a watershed and with winter freezes, large blocks which seemed solid one year will be missing the next. There is natural pro available but not an abundance of it because everything is so loose. Storms roll in quickly and the rock feels like snot on glass when wet so if in doubt that it may about to rain, GET OUT!
If you have adventure in your blood and a lack of responsibility at home, you will find a set of anchors under the bridge at the last turnoff, of which there is a short 5.6/7 climb you can top rope or lead, named “503” originally climbed by Drake T. in 1996. This would be the only climb our source would consider safe. Past this, the ground is covered in shale so stay on rappel as you descend to the next anchors that will take you to the Zeppelin Wall. These anchors were fresh in the year of placement, 2006, but the current condition is unknown. You will pass a bolt on the way down to your left. Remember that location for getting out as it is the only placement until you get to the bottom of “503.” Don’t risk it! Descend and ascend roped up. A 60M rope doubled will get you to the second set of anchors. From here you need two 60M ropes or hang one static 60M to reach the Zeppelin Wall. A 50M will get you to the bottom of “Dave’s Great Escape” which has a set of anchors that you can set up on to reach the Zeppelin Wall. On the way down, look left and make a mental note of the bolts that connect “Dave’s Great Escape,” 5.6/8+, originally climbed in 2007 by David U and Mark T. This is a super fun route if you follow the most direct line between bolts but can easily be cheated in the event you do need to escape rain or darkness. Your goal is to reach a ledge midway on the Zeppelin Wall with the third anchor, which will set you up to climb the upper or lower half. The Zeppelin Wall is awesome. Solid rock / fantastic exposure. If it was all like this I would still climb here. The wall is two pitches and the beta is posted below. Anchors are SS and removable with work if you know how to work with sleeves. If you don’t, find out first before you ruin the setup for future users. Bolts fresh in 2006/2007. Climb at your own risk.
“503” 5.6/7: bolted
Dave’s Great Escape 5.6/8: bolted (some natural pro exists but useless if wet)
You Shook Me 5.7: Standard rack small to hands. Two pitches. Bring 6’ tape or long sling to wrap off is anchor is shot.
Ramble On 5.7 : Trad hands and a couple bolts. Follow ramp until you see bolts above you then go up.
Stairway To Heaven 5.9+:  TR (use “you shook me” to reach top and set up)
Immigrant Song 5.9+ : Thin crack could go Trad but recommend TR. 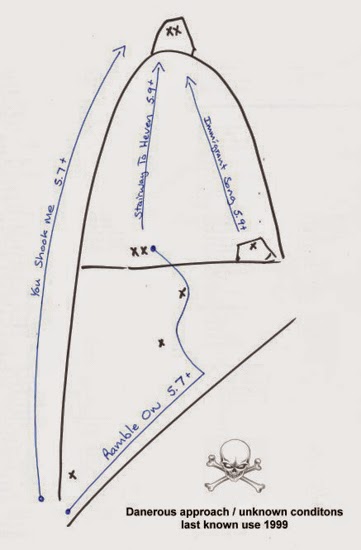